Sometimes your math students need a Roman Numerals chart to remember what number goes with which letter.

Keep our printable chart handy for your own memory, too. :-)

Once kids know the adding and subtracting tricks, they can memorize the values or use the chart for reference.

Once they know how to figure Roman numerals, it's a fun puzzle or math game.

Remembering the "code" is the trick. It's up to you to keep the fun in learning about Roman numbers.

Our printable Math worksheets on this page include a chart, a clock face, and flash cards for teaching Roman numeration or for reviewing Roman numerals. Keep the following chart in your math book or notebook.

Do We Still Use Roman Numerals?

First, do we even use Roman numerals in English?

Long answer: There are many places where Roman numerals are used; especially on buildings, fancy analog clocks, in Bible quotes, and in scientific terms.

It is so fun to hear children exclaim:

Be sure to see the note about the IIII (Roman numeral 4) on Roman numeral clock faces below. How many numerals can you list? Did you know that there are only seven?

You'll also find a bit of the history of Roman numerals on this page.

Worksheets constructing dates are at the bottom of this page.

See these worksheets below:

When I start to teach Roman numerals to children who haven't previously learned them, they marvel at how often they find them in their everyday lives.

When we're studying larger numbers using dates they'll say, "I saw that on the brick building in town!" or "That's on our old DVD cases! I always wondered what that was."

It is great fun to teach Roman numerals, especially when you draw a clock and explain the first twelve numerals and how to add and subtract the values. It's always more fun when it seems like we're learning a new code or puzzle! There's a real system to it.

My favorite quote from a student was, "I tried to read those like words and it did not work!" Too cute.

Literature, History and English Grammar lessons can cover many uses of Roman numerals as with outlines, chapters and volume numbers. These are great to learn for Bible study, too.

When we use a Roman numeral outline in writing composition we use the capital letters first and then the italic or cursive Roman numerals.

Older or handier students can learn the whole list at a glance since there are only seven numerals in the list. 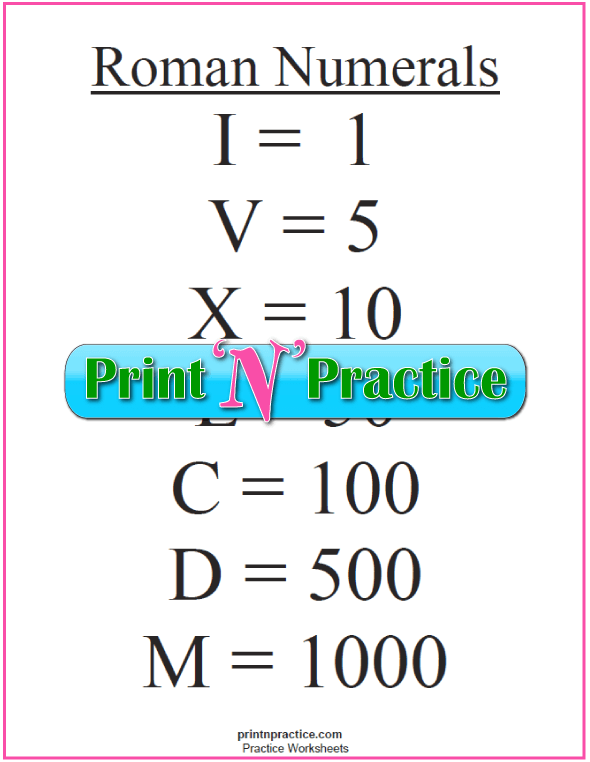 The first and most basic thing to know about how to read Roman numerals is that they aren't numerals or numbers!

They're an ancient system of Roman letters that represent different values. There are rules to add or subtract these symbols of smaller values to find the full amount.

The Roman numeral for 1 is the capital letter I (i). Roman numeral 10 is an X. 100 is a C. 1000 is simply M. Lower case letters are also used, especially in outlines and on some clocks.

There are only seven Latin letters on the Roman numerals chart. Here is the list of numerals in order with their values:

Roman numeral conversion is easy once you understand the method and even the equation that denotes each number.

I love teaching these with the equations. It's when I hear the most oohs and ahs! "I get it!", "Hey, this is neat!", and "Can we do more of these?"

Hint: One in Roman numerals is a capital letter i. 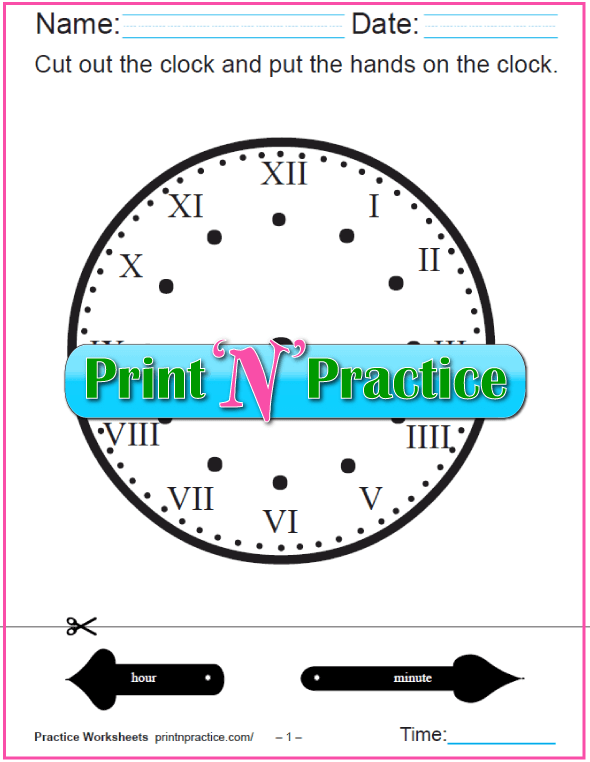 Wikipedia has a great description of the number 4 in Roman numerals as seen on a clock face. Roman numeral iv means 4.

There are several good reasons why many clock faces have the i four times instead of the iv at the fourth hour:

Who would have thought that Roman numerals on clocks use IIII instead of IV?

These are thoughts that I had not known and thought that you would like to know them, too. They make teaching Roman numerals fun.

I'd never paid attention to the IIII before reading the article at Wikipedia's Roman Numeral Clock Face article.

Wikipedia also has an excellent history of Roman numerals from them actually having derived from ordinal tally marks to becoming the numerals we use today.

Our printable clock face worksheet has the Roman numerals on the clock turned level for the convenience of little learners, and a few of the rest of us. :-) 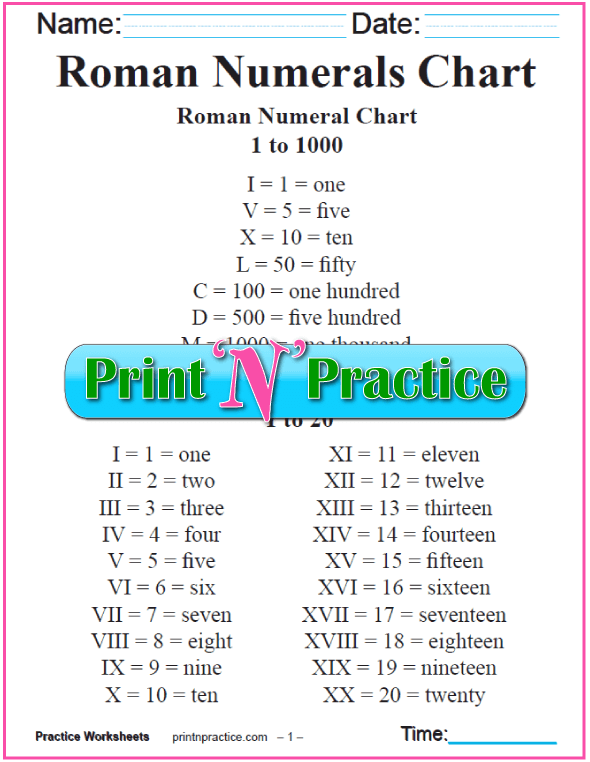 Use this Roman numerals chart to find equivalence and for easy reference. Print it on card stock to use as a Math poster or to keep on your desk.

It shows up to twenty in Roman numerals.

I also have a chart that your students can use to copy the seven numerals - see more worksheets below.

Using a chart is only necessary until you know the values of the seven numerals and can translate them using addition and subtraction.

Memorization is key, although it is no big deal to look it up.

Roman numeral conversion uses the principle of addition. Our 53 would be formed by adding 50 and 3 or LIII. Saxon Math says,

I like to let my students use the Roman numerals chart above as they copy the equations for these worksheets. It helps them make or keep the association between the Arabic number and the Roman. 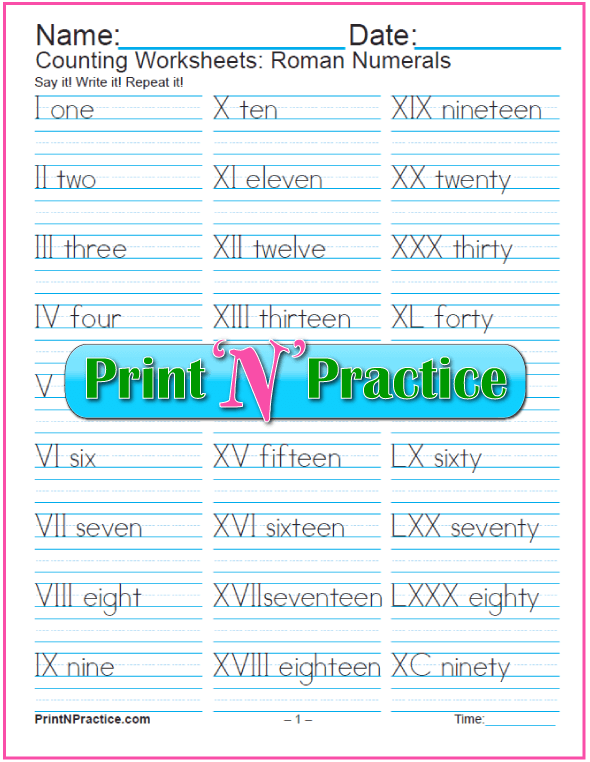 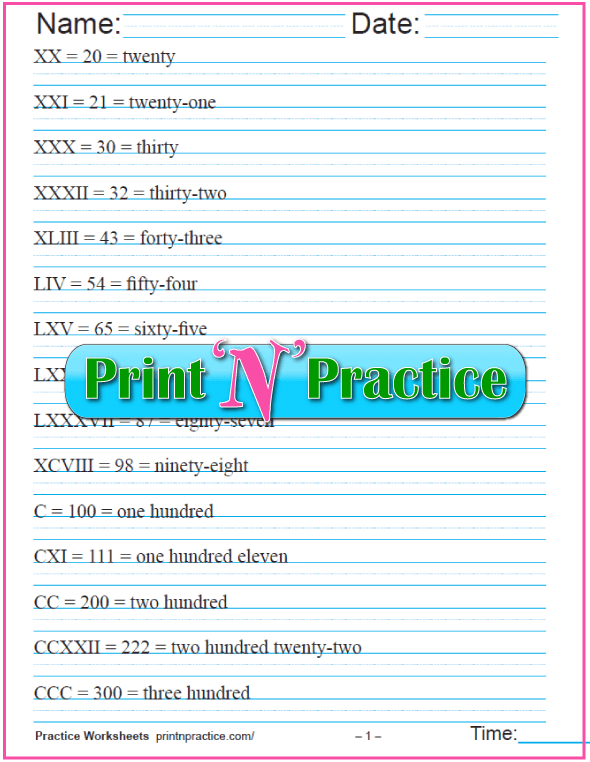 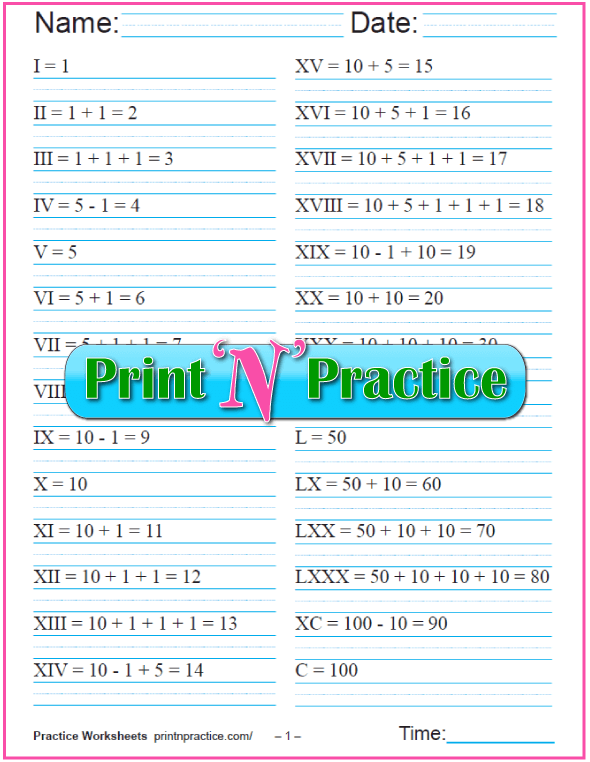 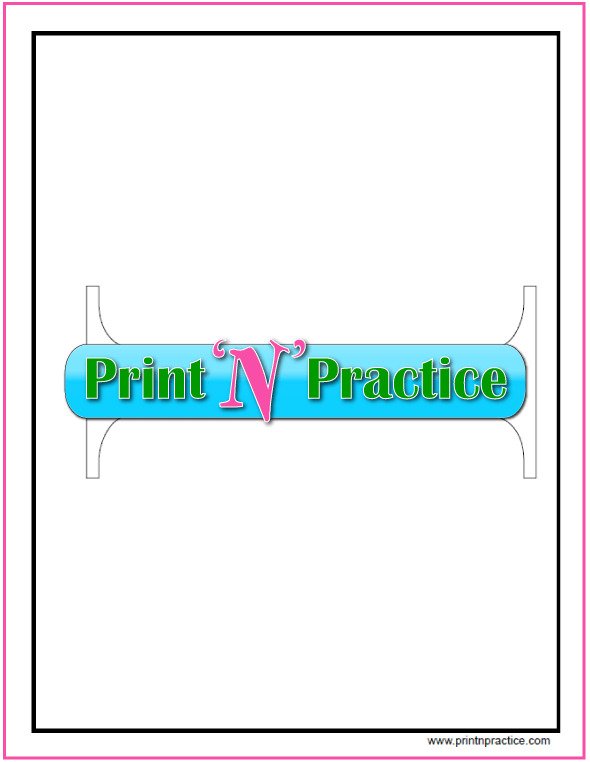 Roman numeral conversion can be easy once you've been taught how to translate the numbers. The next worksheet includes a table of frequently memorized dates.

Generally, there's not much need for teaching Roman numerals beyond the first 1-100 except for forming dates; so learning to put a date in Roman numerals is a great skill to have.

I've seen sixth grade Math books that did not offer much more than a Roman Numerals chart. There was very little practice building the higher numbers which is probably the reason so many people fumble converting Roman numeral dates.

Converting dates is where the children get to use the last four Roman numerals more often. Kids often find that the equations are fun to learn and decipher. 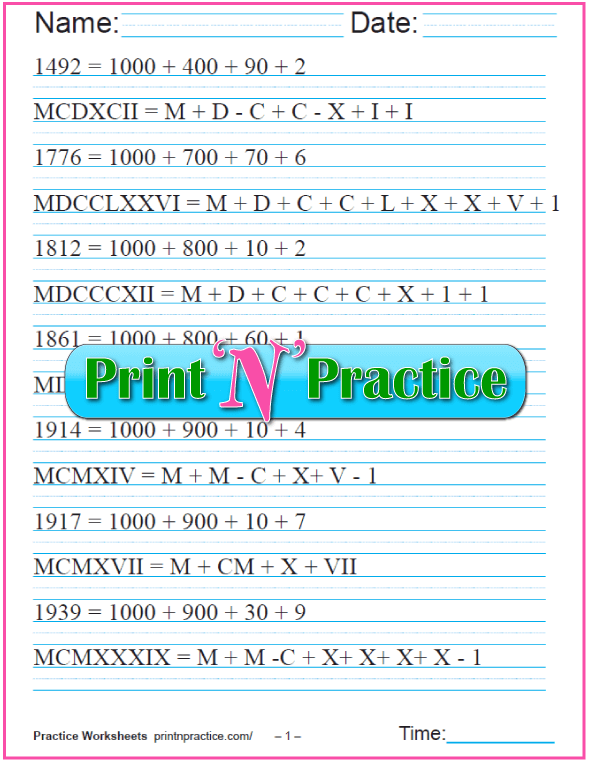 How To Read Roman Numerals - Guide

1. Review the values of the seven numerals:

2. Use our worksheets for practice making the larger numbers in the hundreds and thousands.

3. Then use expanded notation to show how to build the number in Arabic numerals with an expanded notation for building the Roman numerals. Your students can then review this for homework with our Roman Numerals Table For Popular Dates.

Being shown how to make the larger numbers is fun. So many Math lessons show how to make a few, but they often do not show the numerals in order or show enough to practice. End of difficulty! Once you know the Roman numeral conversion you can make the conversion the rest of your life with a reminder from a Roman Numerals chart for the different values. 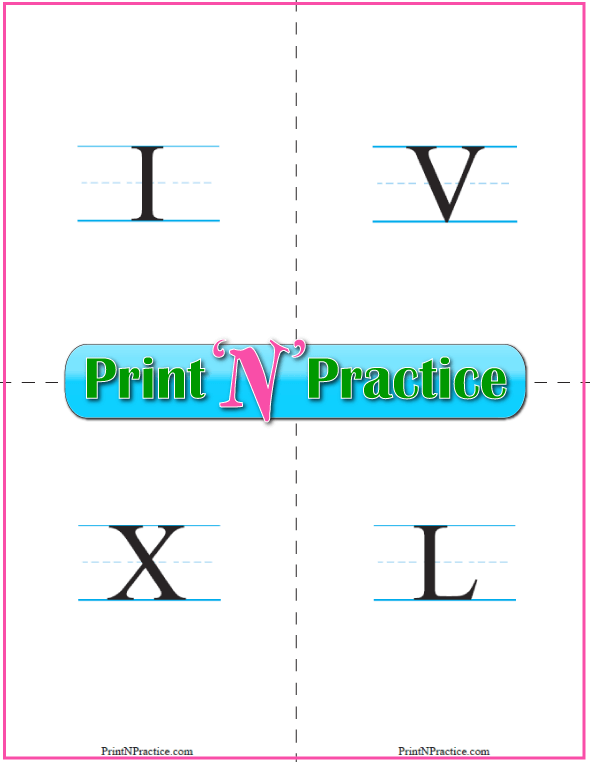 Print our Roman Numerals Flash Cards on card stock two sided or single sided which ever you need.

The answer side has the numeral and the value with the spelling of the number as with the Roman Numeral for 100 having C = 100 = one hundred.

Thank you for visiting our Roman Numerals chart and Roman numerals worksheets page.

Want more? Are you also teaching about Prime Numbers?