Here is a handy selection of Math words that start with L. Teach the parts of words so that the kids can understand other related words with less effort.

If kids know that terms like latitude, least, and line mean relatively the same thing as in every day life, they make the connection better for Math class. 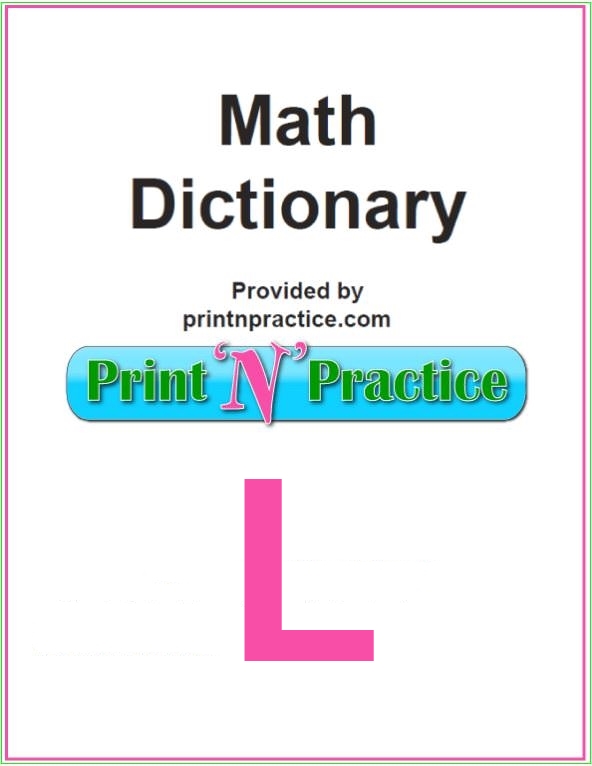 L-Tetromino - a tetromino is the shape of the letter L.

Latin Square - an n X n array of numbers in which only n numbers appear. No number appears more than once in any row or column.

Latitude - the angular distance of a point on the Earth from the equator, measured along the meridian through that point.

Latus Rectum - a chord of an ellipse passing through a focus and perpendicular to the major axis of the ellipse. Plural: latera recta.

Leap Year - a year with 366 days, occurs every four years.

Hint: Many  words on this page mean for Math what they mean for other uses as with Latin, leap, least, length, and less. So many times this can make Math word problems easier to understand if you simply encourage your students that they already know many words in real life.

Get My Free PrintNPractice Newsletters

Least Common Denominator - the smallest number that can be used as the common denominator for a group of fractions.

Least Common Multiple (LCM) - the least common multiple of a set of integers is the smallest integer that is an exact multiple of every number in the set.

Least Upper Bound - the least upper bound of a set of numbers is the smallest number that is larger than every member of the set.

Legend - a notation on a map, graph, or diagram that describes the meaning of the symbols and or the scale used; list.

Lemma - a proposition that is useful mainly for the proof of some other theorem.

Less Than - having the smaller value than.

Line - may be considered as the distance between two points, and is represented by joining the two points.

Line Graph - a diagram showing a system of connections or interrelations between two or more things by using lines.

Line of Best Fit - a straight line used as a best approximation of a summary of all the points in a scatter-plot. The position and slope of the line are determined by the amount of correlation between the two, paired variables involved in generating the scatter-plot. This line can be used to make predictions about the value of one of the paired variables if only the other value in the pair is known.

Line Segment - a piece of a line with endpoints at both ends.

Line Symmetry - If a figure is divided by a line and both divisions are mirrors of each other, the figure has line symmetry. The line that divides the figure is the line of symmetry.

Linear Function - a function of the form f(x) = mx + b where m and b are some fixed numbers. The names “m” and “b” are traditional. Functions of this kind are called “linear” because their graphs are straight lines.

More Words That Start With L

Locus - the set of all points meeting some specified condition.

Logarithm - the exponent of the power to which a base number must be raised to equal a given number.

Logic - the study of the formal laws of reasoning.

Lowest Common Denominator - the smallest number that is exactly divisible by each denominator of a set of fractions.

Lowest Terms - a fraction in which the numerator and denominator have no common factor.

Loxodrome - on a sphere, a curve that cuts all parallels under the same angle.

Lune - the portion of a sphere between two great semicircles having common endpoints (including the semicircles).

You can bookmark or download the whole Math Dictionary here.

I print and keep these Math definitions as a glossary in my binder: Free Printable Math Dictionary For Kids.

You can also download it to your tablet or bookmark the page.

See the alphabetical links below for more online Math words.

Thank you for visiting these words that start with L.

Get My Free PrintNPractice Newsletters