Start here with Math definitions that we have gathered from a half dozen Math books, including a very old one. 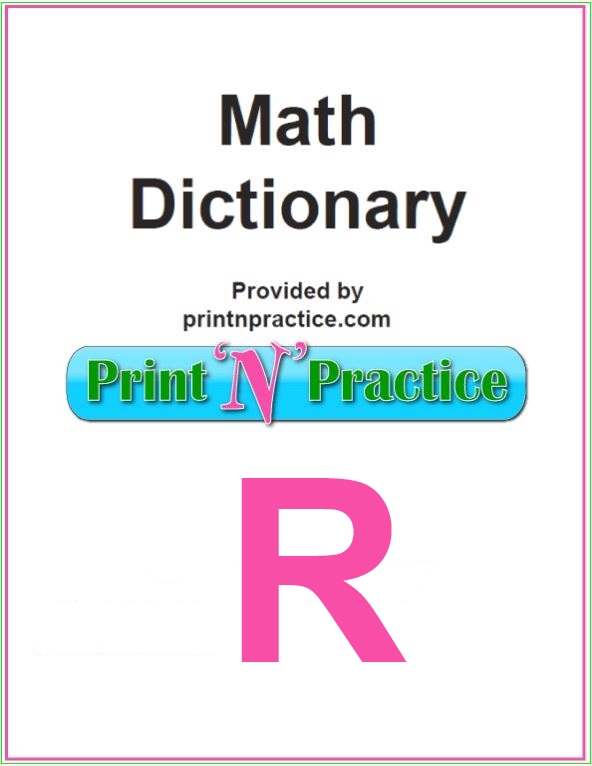 Math Words That Start With R: Supplement your math glossary with the math dictionary that you can print below.

Math Words That Start With Rad-

Radian - a special unit of measure that measures things that are circular.

Radical - a root of a number.

Radical Axis - the locus of points of equal power with respect to two circles.

Radical Center - the radical center of three circles is the common point of intersection of the radical axes of each pair of circles.

Radius - the length of a straight line drown from the center of a circle to a point on its circumference.

Radius of a Circle - a line segment starting at the center and going to the outer edge of the circle. The radius is half of the diameter.

Radix Point - the generalization of decimal point to bases of numeration other than base 10.

Rationalize the Denominator - a process that gets rid of the radical in the denominator.

Ray - a straight line that begins at a point and continues outward in one direction.

Random Number Generators - a device used to produce a selection of numbers in a fair manner, in no particular order and with no favor being given to any numbers.

Range of the Function F - the set of all the numbers f(x) for x in the domain of f.

Rate - a certain percent of the principal which indicates the interest on one dollar for one year; the number denoting how many hundredths of the base are to be taken.

Ratio - a rational number of the form a/b where a is called the numerator and b is called the denominator, a comparison of numbers, the quotient or result of one quantity divided by another (fraction).

Rational Number - a number that can be written as a fraction with integers as the numerator and denominator.

Words That Start With Re-

Real Axis - the x-axis of an Argand diagram.

Real Numbers - consist of both the rational and irrational numbers.

Real Part - the real number x is called the real part of the complex number x+iy where x and y are real and i=sqrt(-1).

Real Variable - a variable whose value ranges over the real numbers.

Reciprocal of a Number - the number need to multiply to get 1 as the answer.

Rectangle - a parallelogram with four right angles and four sides.

Rectangular Coordinate System - a plane made up of an x axis (the horizontal line) and a y axis (the vertical line).

Reflect - to repeat an image by flipping it across a line so it appears as it would in a mirror.

Regrouping - to rearrange quantities in place values of numbers during calculations.

Relatively Prime - two numbers that have no common factors other than the number 1.

Remainder - amount left that is left after division.

Remainder - the dividend remaining when the quotient is not equally divisible by the divisor, also the name of the answer in a subtraction.

Repunit - an integer consisting only of 1’s.

Residual - the observed value minus the predicted value. It is the difference of the results obtained by observation, and by computation from a formula.

Rhomboid - a parallelogram having its angles oblique, and its adjacent sides unequal.

Rhombus - a quadrilateral whose sides are all the same length (congruent) and whose opposite interior angles are the same size (congruent.)

Right Angle - an angle of 90°, one side of the angle is perpendicular to the other side.

Right Triangle - a triangle containing an angle of 90 degrees.

Root - one of the equal factors that will produce it.

Root of a Polynomial - solutions when the polynomial is set equal to zero.

Root of Unity - a solution of the equation xn=1, where n is a positive integer.

Rotate - to rotate an object in a tessellation means to repeat the object by spinning it on a point a certain angle.

Round-off Error - the error accumulated during a calculation due to rounding intermediate results.

Rounding - the process of approximating a number to a nearby number.

Ruled Surface - a surface formed by moving a straight line (called the generator).

Rusty Compass - a pair of compasses that are fixed open in a given position.

I hope that you've enjoyed this list of words that start with R. If you'd like a complete math glossary, print our free Math Dictionary to put in your binder or keep at your desk.