This is the Math Dictionary words that start with P for words like: parallel, perpendicular, and perimeter.

Parallel is easier for kids to remember once you make the association that the double l toward the middle is a set of parallel lines. 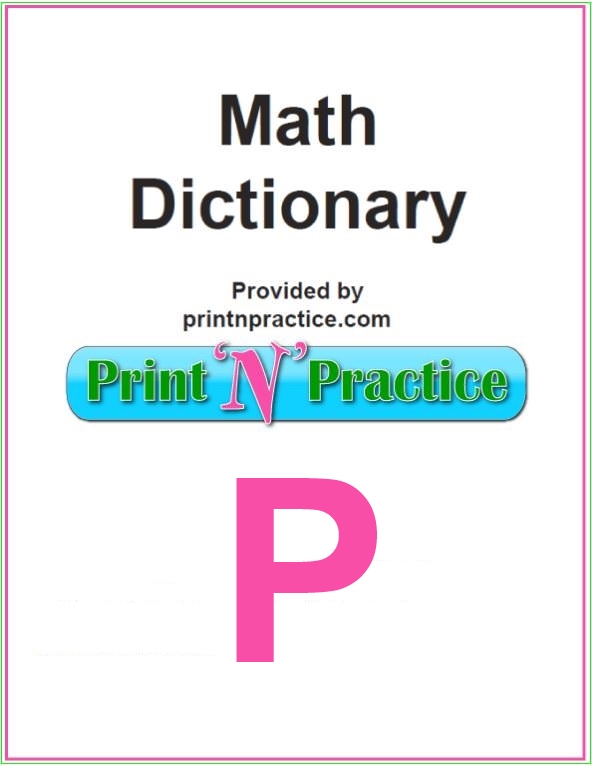 Math Words That Start With P: Fill in where your math glossary leaves off.

P.M. - the period of time between noon to just before midnight.

Palindrome - words, numbers and phrases that can be read the same backwards as forwards. (racecar, 1221)

Palindromic - a positive integer is said to be palindromic with respect to a base b if its representation in base b reads the same from left to right as from right to left.

Pandigital - a decimal integer is called pandigital if it contains each of the digits from 0 to 9.

Paradox - a statement that appears to contradict itself.

Parallel - lines that are in the same plane that do not intersect.

Parallel Straight Lines - those which have the same direction.

Parallelepiped - a prism whose bases are parallelograms.

Parallelogram - a quadrilateral that contains two pairs of parallel sides.

Parallelopipedon - a prism having parallelograms for its bases.

Parentheses - the symbols ( and ) used for grouping expressions.

Partnership - the association of two or more persons in business, who unite their capital and services, and share the gains or losses according to a stipulated agreement.

Pattern - characteristic(s) observed in one item that may be repeated in similar or identical manners in other items.

Pedal Triangle - the pedal triangle of a point P with respect to a triangle ABC is the triangle whose vertices are the feet of the perpendiculars dropped from P to the sides of triangle ABC.

More Words That Start With P

Perfect Power - a number which is the product of equal factors.

Perimeter - the sum of the lengths of all the sides of a polygon, quadrangle s+s+s+s=p.

Permutation - a particular ordering of a set of objects, an arrangement of objects.

Perpendicular - two straight lines are said to be perpendicular if they meet at right angles.

Personal View - an approach taken by mathematicians and philosophers to calculate probability.

Pi - the ratio of the circumference to the diameter.(3.14)

Pictograph - a graph that uses symbols to represent data.

Pie Chart - a type of chart in which a circle is divided up into portions in which the area of each portion represents the size of the data.

Pie Graph - a diagram showing a system of connections or interrelations between two or more things by using a circle divided into segments that look like triangular pieces of a round pie.

Place Value - within a number, each digit is given a place value depending on it’s location within the number; ones, tens, hundreds, thousands.

Plane - a two-dimensional area in geometry.

Plane Surface - one with which a straight line joining any two of its points, will exactly coincide.

Point - has no dimension, it has position only.

Point - in geometry, a point represents a position, but has no size. A point called a vortex.

Polar Axis - a ray from the pole in a fixed direction, analogous to the x-axis in the Cartesian system. The angle between this fixed ray and a ray through the pole and the point of interest gives the value of theta in the coordinate pair (r,theta) used in the polar coordinate system.

Polygon - a closed plane figure formed by three or more line segments that do not cross over each other.

Polyhedra - any solid figure with an outer surface composed of polygon faces.

Polyhedron - a three-dimensional object whose faces are polygons.

Positive Number - numbers that appear to the right of zero on the number line, a number having a plus sign either expressed or understood.

Power - either the number itself, or the product arising from using the number a certain number of times as a factor.

Practical Number - a positive integer m such that every natural number n not exceeding m is a sum of distinct divisors of m.

Prime - a number that has exactly two factors one and itself.

Prime Number - a number that has exactly two factors, 1 and the number itself.

Primitive Root of Unity - the complex number z is a primitive nth root of unity if zn=1 but zk is not equal to 1 for any positive integer k less than n.

Principle - a fundamental truth from which other truths are derived.

Prism - a polyhedron that is formed with two parallel polygons that are connected at the edges with rectangles.

Prism - a solid whose bases are equal polygons, and whose sides are parallelograms.

Prisoners - values for c in the Julia Set or Mandelbrot set where at each iteration the resulting value becomes smaller and smaller, approaching zero.

Probability - the measure of how likely it is for an event to occur.

Problem - a question to be solved.

Proof - an argument that shows something (like a theorem) is true beyond any doubt.

Proper Fraction - a simple fraction whose value is less than one, the numerator is smaller than the denominator.

Property of Zero for Multiplication - zero times any number is zero.

Proportion - two ratios that are equivalent to each other, two equal ratios conected by an equal sign.

Protractor - an instrument used to measure and draw angles on a flat surface.

Pyramid - a three-dimensional solid whose base is a polygon and whose sides are triangles that come to a point at the top.

Pythagorean Triangle - a right triangle whose sides are integers.

Pythagorean Triple - an ordered set of three positive integers (a,b,c) such that a2+b2=c2.

Pythagorean Triples - whole numbers that work together in the Pythagorean theorem.

How to keep these definitions straight?

Once children have a good definition explained to them and they then use the word in a sentence or Math word problem, they're much more likely to understand and remember the definitions.

I myself did not have an easy time remembering which was parallel and which was perpendicular until I began teaching Math. I remember them now because I've taught them and had to make the demonstrations, but also because the word parallel has the double L clue - those letters themselves are parallel. It's also a good way to remember that the spelling has the L twice.

Thank you for visiting our Math words that start with P.